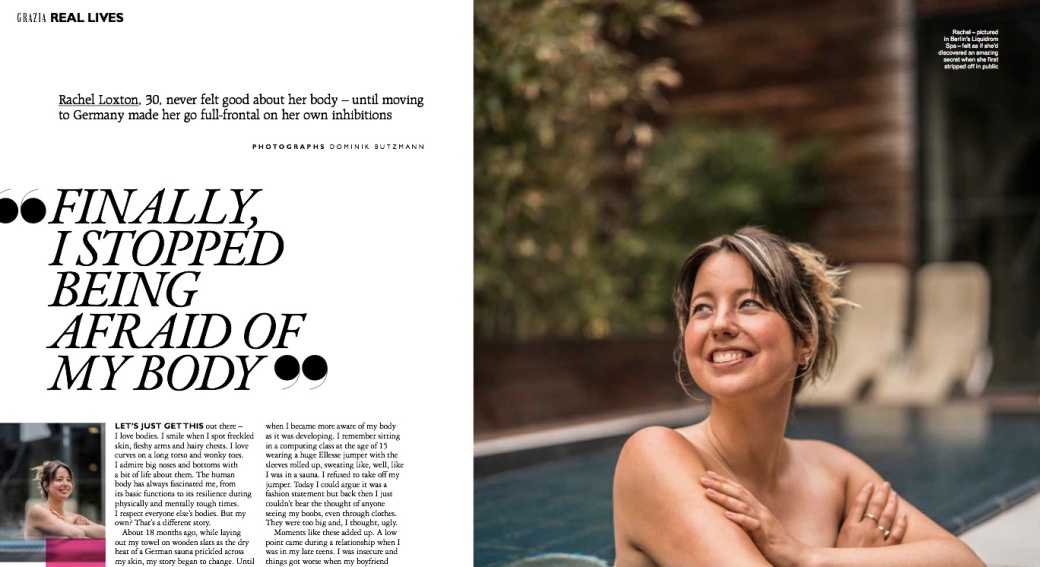 Let’s just get this out there – I love bodies. I smile when I spot freckled skin, fleshy arms and hairy chests. I love curves on a long torso and wonky toes.

I admire big noses and bottoms with a bit of life about them. The human body has always fascinated me, from its basic functions to its resilience during physically and mentally tough times. I respect everyone else’s bodies. But my own? That’s a different story.

About 18 months ago, while laying out my towel on wooden slats as the dry heat of a German sauna prickled across my skin, my story began to change. Until then, my relationship with my body had always been volatile. There was a reason I dodged showers at the gym and hid behind towels when sunbathing, and why I dreaded getting undressed for partners: my body was ugly. I didn’t feel comfortable in my own skin.

The problem started in my early teens when I started to become aware of my body as it was developing. I remember sitting in a computing class at the age of 15 wearing a huge Ellesse jumper with the sleeves rolled up, sweating like, well, like I was in a sauna. I refused to take off my jumper. Today I could argue it was a fashion statement but back then I just couldn’t bear the thought of anyone seeing my boobs, even through clothes. They were too big and, I thought, ugly.

Moments like these added up. A low point came during a relationship when I was in my late teens. I was insecure and things got worse when my boyfriend made digs about my weight and ‘saggy’ boobs. Mentally, I dissected my body into tiny pieces. Thighs? Wobbly. Feet? Disgusting. Tummy? Weird. If I ever had a fleeting positive thought I’d scold myself. It was my love handles that bore the brunt. ‘I need to figure out how to get rid of them,’ I’d say, as if it was possible to shave them down with a grater.

Then came never-ending diets – yes, even the cayenne pepper master cleanse reportedly favoured by Beyoncé – and extreme fitness plans. Like many people following such fads, my weight fluctuated but it didn’t matter what the scales said – there was always something wrong with what I saw. It’s no exaggeration to say that I was afraid to stand in front of the mirror without clothes.

Looking back now, I can see there was nothing wrong with my appearance. I’d even say I was in the grips of body dysmorphic disorder. Luckily, having  a negative body image didn’t stop me from having healthy relationships and my overall confidence grew during my mid-twenties, helping to shrink some demons. During that time I developed healthier and less extreme habits – like jogging regularly – but there was still a long way to go. I rarely accepted compliments and didn’t feel confident without my armoury of clothes. The problem wasn’t something anyone else could fix.

Then in October 2015, I arrived in Berlin for a three-month journalist fellowship programme. From the moment I landed I was determined to embrace all things German – from techno to potato sandwiches, excuse the stereotyping.

Soon I discovered another hobby loved by the Germans – nude spas. My first experience at the local Stadtbad (town swimming baths) was terrible. I thought going naked was optional but when a naked man shouted at me for wearing my swimsuit in the sauna – apparently it’s unhygienic – I realised I was wrong.

It took me a few days to get over that memorable welcome-to-the-sauna but the more I thought about it the more I felt determined to join in – the German way. I mean, what was the worst that could happen? I’d already been chased out by an angry naked man.

I began to understand that nudity is a completely different concept in Germany from what I’ve grown up with. Taking your clothes off, I realised, isn’t necessarily a sexual thing. It’s nothing to be ashamed of. Shock – it’s normal to be naked. This is the country with Freikörperkultur – Free Body Culture. If you wander along to a lake on a sunny day you’ll find pensioners in the buff, friends chilling without clothes and lone swimmers hanging free. No one cares what you look like, it’s just bodies – we all have them.

It’s a world away from the UK, where our culture views nudity as something to be hidden. Couples here even go on first dates at the spa. Imagine your first meeting being naked in a sauna?

I felt inspired. I couldn’t change the culture I grew up with but I could try and change my unhealthy views. When I finally took the plunge and went fully naked, I viewed it like taking off as a plaster – get in there quick to avoid a U-turn. That day, I slipped into the sauna with five other people – four men and another woman. When I took my towel off the silence felt deafening. Inside, my brain was shrieking, ‘What are you doing? What do you have to prove?’ Well, actually, I wanted to prove to myself I could do this. I needed to know my body was nothing to be afraid of.  I laid my towel down and briefly looked at myself. Every bit of me was officially out and… nothing bad was happening! I felt blissful. The heat, the silence, even the company – all wonderful.

It felt like all the voices in my head were melting away with the droplets of sweat forming on my skin. I hadn’t worked out every day, I’d been eating potato sandwiches. But there I was, naked in a public place. I drifted home from the Stadtbad elated. Who knew that taking your clothes off would have such a positive mental effect?

At the start of the year I made the decision to leave my newspaper job in Scotland and relocate to Berlin. It wasn’t an easy choice, but ultimately I wanted to immerse myself more in a culture that seemed to bring out the best in me… and, clearly, a bit more of me.

Now I visit spas regularly and with every trip I feel a little more confident. I’m not quite at the stage of naked Tinder dates but get back to me in a few months and I’ll let you know.