Here’s a short tale about the time a man, nicknamed “Mr Brexit”, was invited by a far-right political party to speak at a rally of their supporters in Berlin.

It was a slightly bizarre setting. A renaissance fortress, in Spandau, west Berlin, was taken over last Friday by members of the Alternative for Deutschland (AfD) party to host a pre-election event. But not just any rally – AfD politician Beatrix von Storch had invited a guest – ex UKIP leader Nigel Farage.

Police stuffed into riot vans and patrolled the streets around the building in anticipation of Farage’s arrival, while protestors, who stood in the drizzly rain, carried placards. One read: ‘British Berliner against Brexit.’

Reporters, cameramen and women plus photographers had to pass three security checks to enter the building and bags were searched. At the last security point a German journalist joked that it was “very funny” how we were the ones being searched when arguably the real danger was the politicians inside the conference room.

The AfD had their logo decked out across a stage and around 200 chairs were set up. Two interpreters (carrying out English and German translations) sat in a cabin beside the stage and headsets were given out to people who needed them. There was tea, coffee, wine and finger foods. No expense spared. To an onlooker, without any knowledge of politics, the situation could have appeared to be a friendly soiree.

Not the case. The AfD is populist party, which is expected to win its first parliamentary seats in the Bundestag following the September 24 election. If it does, it will be the first hard-right nationalist party to enter the country’s parliament in the post-World War II era. It has an anti-immigrant, anti-Muslim, Eurosceptic agenda and party members make a habit of sprouting out hugely controversial statements. (see my story here, this Politico story and this from the Independent. Their election campaign ads are also super offensive.

Farage and von Storch, both MEPs, hosted a press conference in which they praised each other (get a room, guys?) and talked up their own agendas before it was the turn of AfD supporters to hear the pair talk.

The room was full of white people. There were a lot of older faces but also, many young people. They were mostly Germans but some Americans. It was a visible reminder that despite the Berlin bubble of left-leaning, open-minded thinking, the city and country is not immune to the lurch to the right that we’ve seen in Europe and the US.

As von Storch talked up her party, there were murmurs of agreement throughout the crowd. When Farage was introduced the room came alive: he received a standing ovation and deafening claps.

Von Storch said Farage was a “role model” and “the man who made the impossible possible”, in reference to the Brexit vote. There were belly laughs among the giddy crowd as Farage slagged off EU leaders, UK and German politicians. He called Angela Merkel’s decision to open Germany’s borders to migrants and refugees the “worst decision by any western leader in modern political history”. More cheers.

In the question/answer session, one man stood up and said: ‘Mr Farage you’re amazing on youtube and you’re even better in real life, thank you for coming!’

Another audience member asked for advice from Farage on how to avoid a Rotheram child abuse-type scandal in Germany, linking it to the influx of refugees/migrants.

What interested me was how desperate he seemed. He’s touring Europe urging people, like in this rally, to support the anti-EU movement. He seemed terrified that Brexit won’t work out as he hopes for the UK. It was intriguing to watch him interact with the crowd because he does have charisma and attracts media coverage wherever he goes but who knows if he has any real influence outside of the UK.

When I spoke to Farage after the event he said he was “worried” that the UK would not reach a trade deal with Europe after Brexit and that negotiations could be a waste of a time. 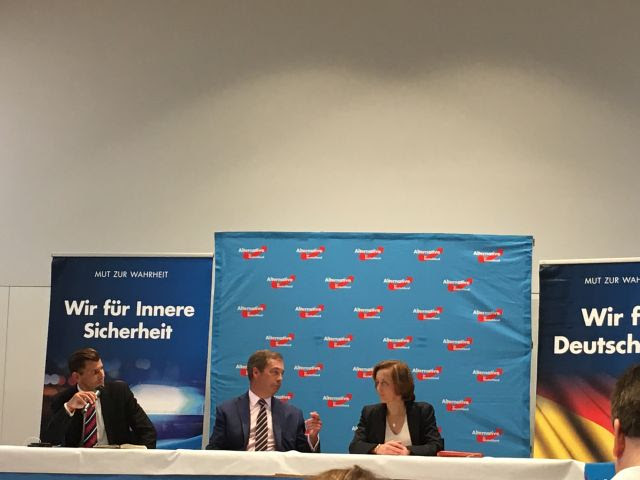 Farage and von Storch at the rally

He said Brexit negotiations were coming up against “real pigheadedness” from EU leaders in Brussels and criticised the UK Government for being “ill prepared”.He said: “I think the UK Government were ill prepared, very slow out of the blocks – it took nine months to trigger Article 50. Then the General Election which took three months out of the period. I would say now they’re beginning to get it together. I think some of the thinking, the papers that have been released – we’re getting there but we’re coming up against real pigheadedness in Brussels.

“I personally want to have the best relations with Europe, I think a trade deal is in all our interests. So yeah I’m pretty worried about the way it’s going now. I’m worried that we could be wasting two years of our life on a negotiation that they (EU leaders) don’t seem to want to have a good resolution to.”

Farage, who resigned from Ukip in the wake of Britain’s 2016 vote to leave, said he believed he was helping the cause by speaking directly to people in Europe and appealing to them to start a discussion on Brexit and the future of the European Union.

Farage said he was going to a do “a lot” of these events “all over Europe”.

He added: “I’m in Prague next Friday. I think the EU is standing as a barrier between the United Kingdom and the people of Europe.”

The AfD is currently polling at around 8 – 11%. Farage said it would be a “historic achievement” if the party entered German parliament.

But polls can be wrong. Germany votes next Sunday and we should all watch closely to see what happens next.  Whatever the result is I think there needs to be more analysis from the media by speaking to voters to find out why there is growing support for the far right.

EXTRA NOTE: This is one for the Scottish readers…Farage also told me Scotland would never split from the UK and that Brexit was “ironically more exciting” for Scots supporting independence because it will deliver more powers to Scotland than indy. Thoughts?

Adapted from my newsletter, on the road with eu, published on September 15