Skip to content
One of the many things I’ve learned since moving to Germany is that politics doesn’t start and end with the UK. Obviously world politics has always been interesting – and is a hyped-up crazy spectacle right now – but I feel the UK is fairly inward looking.

It always frustrated me that the newspaper industry in Scotland, for example, didn’t see the value in properly covering foreign affairs. Yeah, yeah, I know: budget cuts, etc. But still, I think audiences want wider international content (as well as local) and in an ideal world where newspapers weren’t being run into the ground, editors would recognise this as a priority.

So I like that no-one really cares about Scottish independence in Berlin. Sometimes I shove it down peoples’ throats but on the whole, it’s good for me to look at the bigger picture and not just focus on my home country.  Every day I meet people from all over the world – Russia, Spain, Moldova, Italy, Poland, Australia, Slovenia, Israel and Saudi Arabia – there are many political situations to discuss.

Here in Germany the elections are on September 24 and I’m enjoying watching the campaign unfold because I love mud-slinging, desperate politicians who prepare like it’s a Mayweather v McGregor fight. Except it doesn’t seem to be like that here. Everyone seems a bit more….measured?

Of course there’s a bit of drama: The SPD’s (Social Democrats) Martin Schulz accusing current Chancellor Angela Merkel, leader of the CDU (Christian Democratic Party), of being aloof and disconnected from reality. Then there’s Merkel hosting rallies in far-right stronghelds and being booed by protestors. However, it’s not quite the bite I’m used to but maybe that’s a good thing.

So here’s a little taster of the parties/people campaigning in this election. The German voting system means the winning party usually doesn’t gain enough seats for a majority so has to form a coalition. Right now it’s a CDU/SPD partnership (along with the CDU’s Bavarian sister party, the Christian Social Union) but with lots of smaller parties gaining more support, other coalitions are possible following the Bundestag election.

CDU
Let’s start with Mutti, the nickname given to Merkel because she’s always there for you, apparently, like your mum. The centre-right CDU’s election posters show ‘Sicherheit und Ordnung” – security and order – are high on the agenda. Interesting because many Germans believe there was zero security and order in the way the country took in refugees (more than a million arrived in 2015), and this appears to have fuelled the rise in support for right wing populist parties like the AfD (more on them later).

Still, Merkel’s been admired for defending her policy and that’s a breath of fresh air for politicians who are usually so scared of losing votes they’ll say anything. She was also named TIME Person of the Year in 2015, which was probably neither here nor there for her because she doesn’t seem to be the excitable type. But it seems like a good thing.

A few voters have told me they don’t like every policy but they feel they can trust her, that she’s a safe option. The Germans like safe options, I think.

From an outside perspective the CDU’s message appears to be similar to the Tories recent catastrophic ‘strong and stable’ crusade except it’s bound to do better because Theresa May isn’t anywhere near Germany. (AND EVERY DAY I AM GRATEFUL FOR THIS GEOGRAPHIC FACT.)

Even though Merkel voted against gay marriage – a nod to her conservative roots and supporters – she still allowed the vote in the first place which passed in parliament, and this has been viewed as a smart political move rather than a damaging one.

The CDU is also focusing on family values, employment, public investment and tax cuts. So let’s see if the country will go back to mummy. That last sentence really made me cringe.

Merkel, above. The message translates to: ‘For a Germany in which we live well and gladly.’ 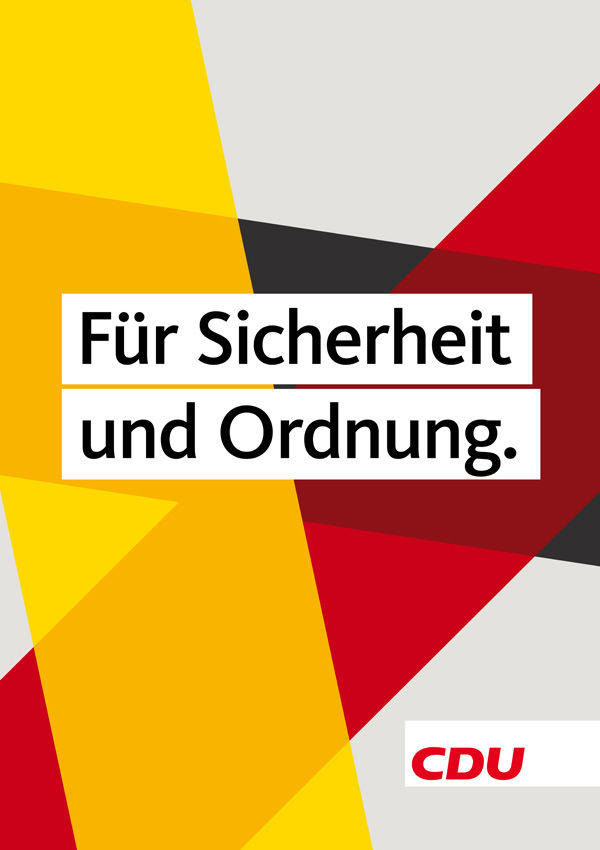 ‘For security and order’
SPD
Next up and representing the centre left is the SPD’s Martin Schulz, who was President of the European Parliament and therefore has a continental feel about him.Earlier this year the party experienced a high in the polls and it looked as if it might have been a ‘Wendepunkt’ for the SPD – a turning point. But since then they’ve consistently dipped.If I were advising the party (they haven’t employed an Aberdonian for this purpose yet) I’d look to Corbyn.  Yes, Jeremy Corbyn of messed-up UK Labour fame. Get Schulz into dad clothes, get him to appeal to the kids, the Glastonbury generation or whatever the equivalent is in Germany. Get him talking about the working class and social justice, but in a way that the millennials are going to get on board with. Get him on a stage wearing Vetements-style sportswear and a bakers boy cap and get the lefty, artsy, young attractive family types who cycle their kids around Berlin in mildly dangerous ‘Kinderanhänger’ on his side.When the gay marriage vote was announced the SPD and Schulz were quick to jump on the ‘we’re more liberal and open than Merkel’ train. They even stuck a rainbow flag above their headquarters. But it might have been too little to late.

The SPD were lucky to have a spike in supporters but I don’t think Schulz will capture the imaginations of the youth or anyone else. Currently the SPD are in a ‘grand coalition’ with the CDU which may well happen again.
But, really guys. You could have done better! 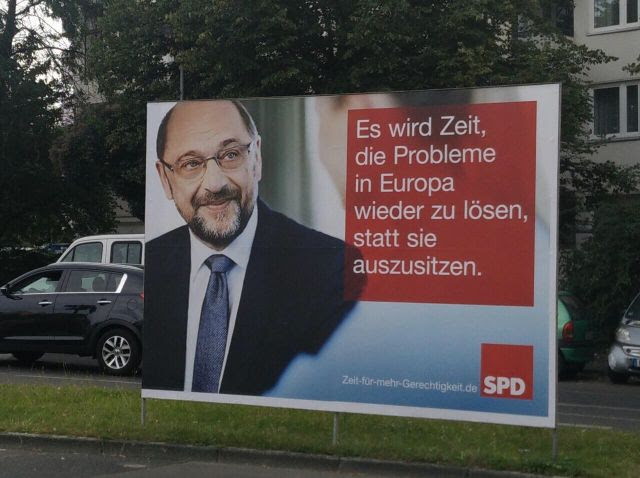 Martin Schulz, above. ‘It’s time to solve the problems in Europe, instead of exposing them.’ 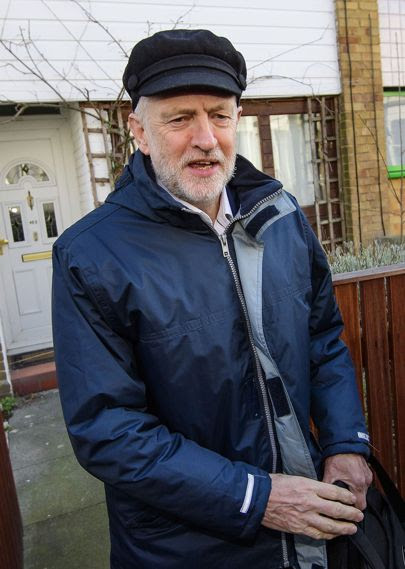 Your dad, above. Or Jez Corbyn. You decide.
The Left
Who might capture the millenials’ vote? Well, maybe Die Linke. The Left.
Voters have told me this party is a “hangover from East Germany” because that’s where the group descend from. This makes some people suspicious but they have clearly spent A LOT OF CASH on a shiny colourful advertising campaign, with messages laid out in all sorts of different fonts that equate to ‘redistribute the wealth’ and ‘kill all rich people’. That last one isn’t true.It’s your classic far left innit? I have a feeling a lot of Germans are into this, possibly more from the younger generation. The party is led by Sahra Wagenknecht who looks extremely confident in the campaign posters around town. In my area (Kreuzberg) there’s another dude called Dietmar Bartsch who looks like he’s stepped out of the Danish political drama Borgen and another called Pascal Meiser, who resembles a lad they pulled off the street to pose in a campaign to prove politicians are just people like you and me.The group is also campaigning for a rise in national minimum wage and the dissolution of NATO. They are likely to gain a fair few votes. I’d also like to award them the award for Best Poster Campaign. I especially like the ‘I love MDMA’ and ‘rave on’ chat that’s been scribbled onto Mr Bartsch’s face. 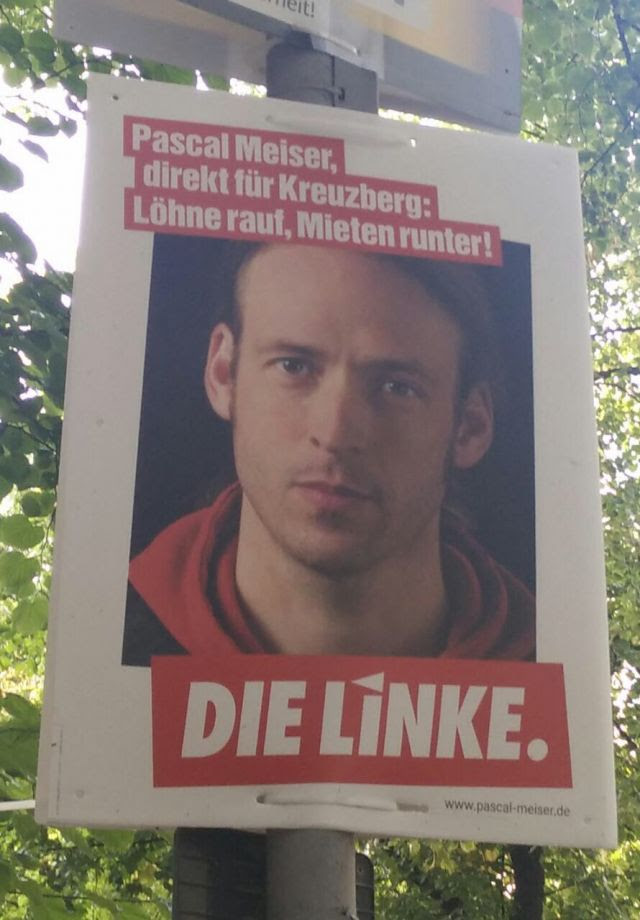 Die Linke’s Pascal Meiser, above. ‘Directly to Kreuzberg: Wages up, rent down!’ 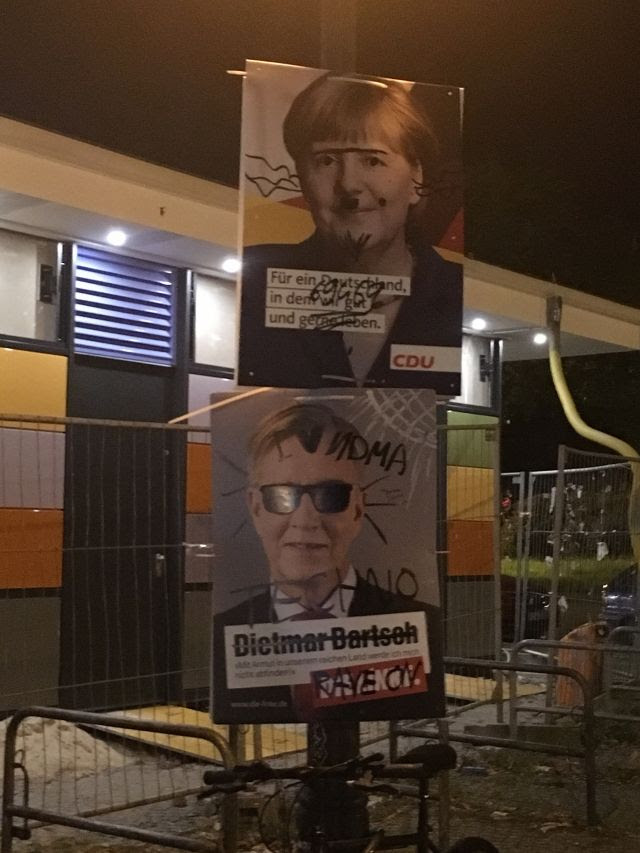 ‘Rave on’ graffiti over CDU and Die Linke placards near Südstern in Kreuzberg
FDP
Next on my list we have the Free Democratics or FDP. The FDP’s hopes are pinned on their “charismatic” 38-year-old leader Christian Lindner. I know! Isn’t he young! That’s the reaction they hope for. The campaign posters show him playing on Snapchat or Instagram with messages like: ‘digital first, concerns second’ and ‘impatience is also a virtue’.  Meanwhile, Lindner avoids eye contact with the camera as if he’s in a Hugo Boss ad. The party is pro-business, campaigns for tax cuts and to remain in financial markets. Also, my sources say the party has friends in the media so this won’t hurt them.They’ve thrown a lot of money on image and marketing but will the Germans buy into it? I did speak to one person who had been won over by FDP, so maybe. 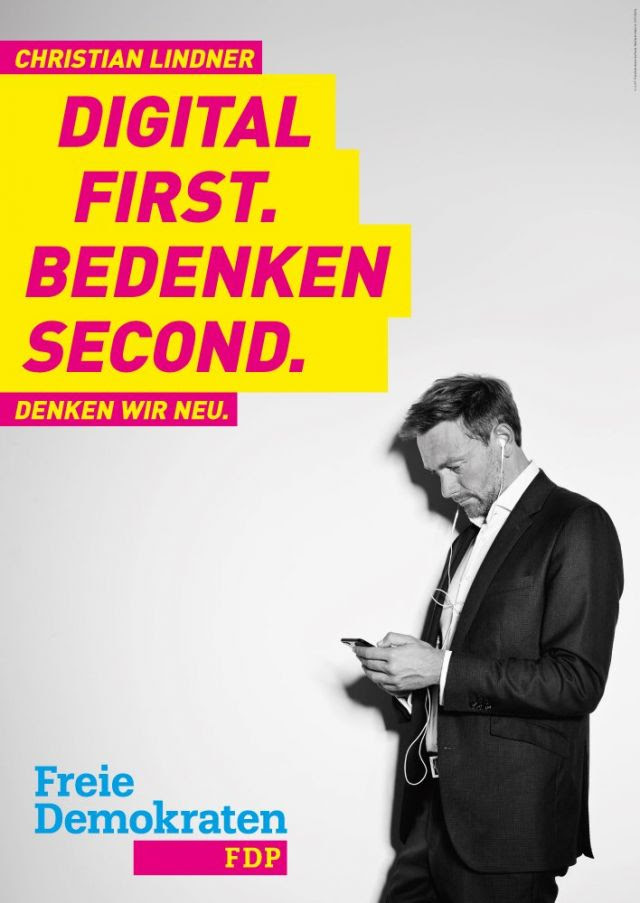 Christian Lindner, above. ‘Digital First. Concerns second.’
Greens
I don’t have a lot to say about Germany’s Green Party (Grüne). Their campaign seems a bit boring except they do have pretty sunflowers on their placards which are worth a mention. But I know a lot of voters are into this party and their focus on the environment and social policies. So they are likely to have a fairly big role in the Bundestag.

Afd
Last we have the Alternative for Germany (AfD), the right-wing populist party, which many people believe/fear will gain the 5% needed to get into the Bundestag.

Their campaign is the most offensive, with posters of scantily dressed women and the tagline ‘we’re into bikinis, not burkas’. Another placard shows a pregnant woman with the message: ‘New Germans? We make them ourselves.’ Worrying, especially in a country that lives with the legacy of the Nazis.

The party’s hardline anti-EU, anti-immigration views have attracted voters from almost all of the other parties, especially among lower income households and they’ll be relying on these votes when Germany goes to the polls.

Some more trivia: The party admires Trump, makes regular racist outbursts and is a fan of German-produced Haribo sweets (When I interviewed them once I was offered bucketloads of these sugar treats. I was also invited on party trips which I almost went on out of curiosity – how do racists party?! Would there be hot tubs or saunas? Do racists flirt with each other? Do they dance?)

If you’re in the Trump/Nigel Farage club then this is the party for you. 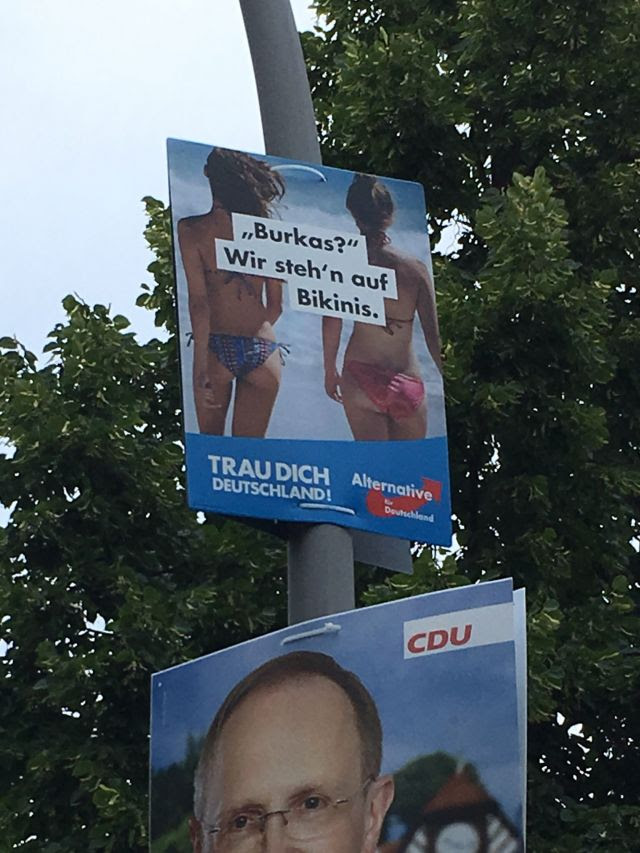 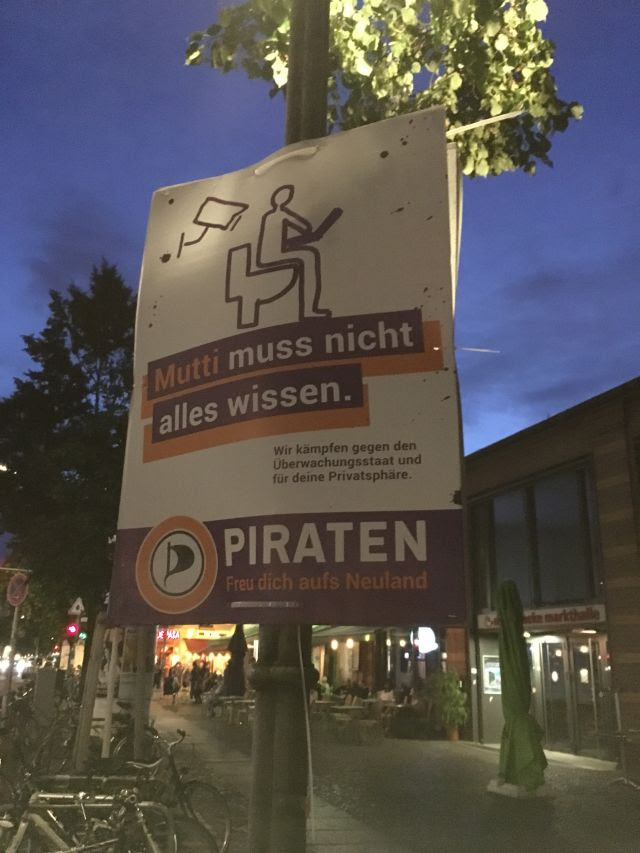 ‘Mutti doesn’t have to know everything’

Now, which party would you choose? HAPPY VOTING (if you can vote).

NOTES
These are obviously my opinions. I’d love to hear your views so please get in touch.

Adapted from my newsletter, on the road with eu, published on September 1