Four months ago they had never played together – most of them had never played at all – but in just a few weeks the Sunday Herald band will take to the T Break stage at Scotland’s largest festival, T in the Park. 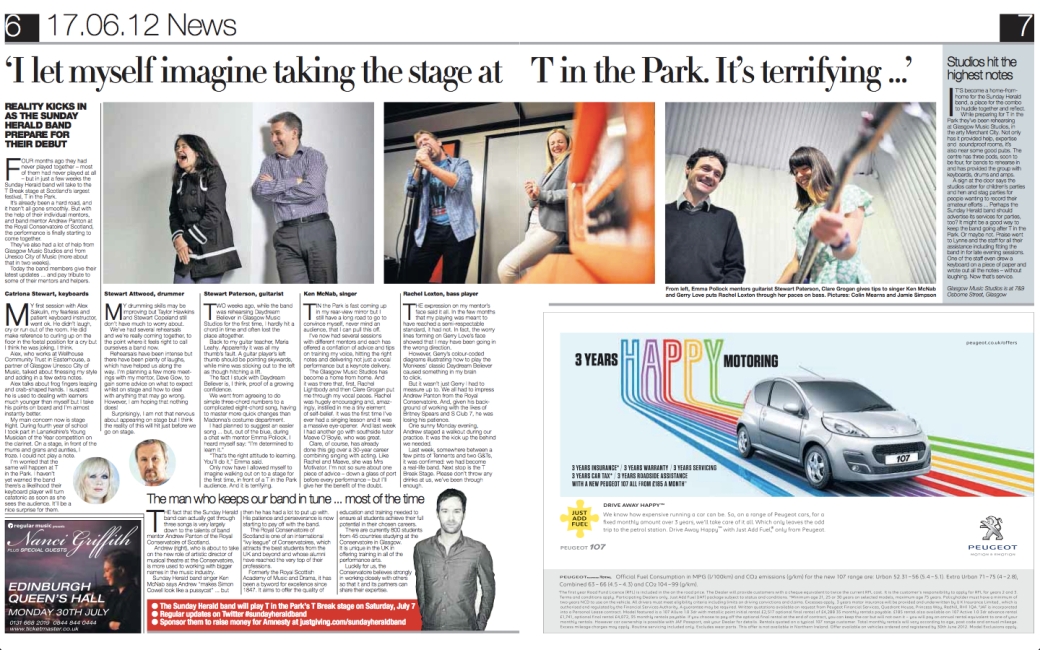 It’s already been a hard road, and it hasn’t all gone smoothly. But with the help of their individual mentors, and band mentor Andrew Panton at the Royal Conservatoire of Scotland, the performance is finally starting to come together.

They’ve also had a lot of help from Glasgow Music Studios and from Unesco City of Music (more about that in two weeks).

Today the band members give their latest updates … and pay tribute to some of their mentors and helpers.

Catriona Stewart, keyboards MY first session with Alex Sakulin, my fearless and patient keyboard instructor, went ok. He didn’t laugh, cry or run out of the room. He did make reference to curling up on the floor in the foetal position for a cry but I think he was joking. I think.

Alex, who works at Wellhouse Community Trust in Easterhouse, a partner of Glasgow Unesco City of Music, talked about finessing my style and adding in a few extra notes.

Alex talks about frog fingers leaping and crab-shaped hands. I suspect he is used to dealing with learners much younger than myself but I take his points on board and I’m almost instantly better.

My main concern now is stage fright. During fourth year of school I took part in Lanarkshire’s Young Musician of the Year competition on the clarinet. On a stage, in front of the mums and grans and aunties, I froze. I could not play a note.

I’m worried that the same will happen at T in the Park. I haven’t yet warned the band there’s a likelihood their keyboard player will turn catatonic as soon as she sees the audience. It’ll be a nice surprise for them.

Stewart Attwood, drummer MY drumming skills may be improving but Taylor Hawkins and Stewart Copeland still don’t have much to worry about.

We’ve had several rehearsals and we’re really coming together, to the point where it feels right to call ourselves a band now.

Rehearsals have been intense but there have been plenty of laughs, which have helped us along the way. I’m planning a few more meetings with my mentor, Dave Gow, to gain some advice on what to expect whilst on stage and how to deal with anything that may go wrong. However, I am hoping that nothing does!

Surprisingly, I am not that nervous about appearing on stage but I think the reality of this will hit just before we go on stage.

Stewart Paterson, guitarist TWO weeks ago, while the band was rehearsing Daydream Believer in Glasgow Music Studios for the first time, I hardly hit a chord in time and often lost the place altogether.

Back to my guitar teacher, Maria Leahy. Apparently it was all my thumb’s fault. A guitar player’s left thumb should be pointing skywards, while mine was sticking out to the left as though hitching a lift.

The fact I stuck with Daydream Believer is, I think, proof of a growing confidence.

We went from agreeing to do simple three-chord numbers to a complicated eight-chord song, having to master more quick changes than Madonna’s costume department.

I had planned to suggest an easier song … but, out of the blue, during a chat with mentor Emma Pollock, I heard myself say: “I’m determined to learn it.”

”That’s the right attitude to learning. You’ll do it,” Emma said.

Only now have I allowed myself to imagine walking out on to a stage for the first time, in front of a T in the Park audience. And it is terrifying.

Ken McNab, singer TIN the Park is fast coming up in my rear-view mirror but I still have a long road to go to convince myself, never mind an audience, that I can pull this off.

I’ve now had several sessions with different mentors and each has offered a conflation of advice and tips on training my voice, hitting the right notes and delivering not just a vocal performance but a keynote delivery.

The Glasgow Music Studios has become a home from home. And it was there that, first, Rachel Lightbody and then Clare Grogan put me through my vocal paces. Rachel was hugely encouraging and, amazingly, instilled in me a tiny element of self-belief. It was the first time I’ve ever had a singing lesson and it was a massive eye-opener. And last week I had another go with southside tutor Maeve O’Boyle, who was great.

Clare, of course, has already done this gig over a 30-year career combining singing with acting. Like Rachel and Maeve, she was Mrs Motivator. I’m not so sure about one piece of advice – down a glass of port before every performance – but I’ll give her the benefit of the doubt.

Rachel Loxton, bass player THE expression on my mentor’s face said it all. In the few months that my playing was meant to have reached a semi-respectable standard, it had not. In fact, the worry lines forming on Gerry Love’s face showed that I may have been going in the wrong direction.

However, Gerry’s colour-coded diagrams illustrating how to play the Monkees’ classic Daydream Believer caused something in my brain to click.

But it wasn’t just Gerry I had to measure up to. We all had to impress Andrew Panton from the Royal Conservatoire. And, given his background of working with the likes of Britney Spears and S Club 7, he was losing his patience.

One sunny Monday evening, Andrew staged a walkout during our practice. It was the kick up the behind we needed.

Last week, somewhere between a few pints of Tennents and two G&Ts, it was confirmed: we had become a real-life band. Next stop is the T Break Stage. Please don’t throw any drinks at us, we’ve been through enough.