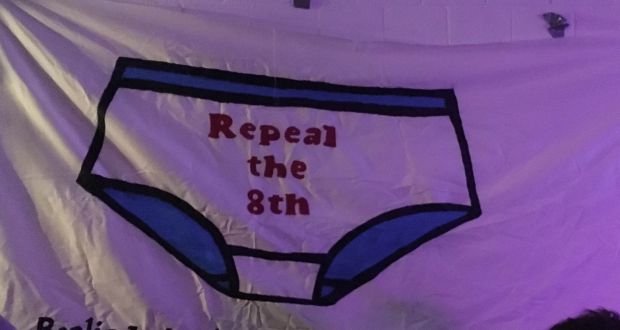 Banner at the warehouse hidden inside a bare industrial estate between Berlin’s diverse Neukölln and Treptow areas.  Photograph: Rachel Loxton

If it wasn’t for a giant banner of a pair of knickers on the wall, it would look like a typical Friday night at a Berlin club.

The poster, with “Repeal the 8th” written across it in red, is attached to the wall with masking tape. It brightens up the venue, a party warehouse hidden inside a bare industrial estate, sandwiched between Berlin’s diverse Neukölln and Treptow areas.

Tonight the venue has become a gathering for Irish people – more than 1,300km away from where the referendum on May 25th will take place.

The referendum will ask voters if they want to repeal the Eighth Amendment of the Constitution, which grants equal right to life to the mother and unborn child.

The Berlin-Ireland pro-choice solidarity group organised “Plugged in for Repeal” to highlight how people can vote in the referendum or campaign, as well as raise money and remove the stigma of abortion.

Dozens of people have already arrived at 9.30pm.

The atmosphere is intense but cheerful as conversation moves from serious talk on the effects of the Eighth Amendment to “soli shots” (solidarity shots) and homemade Guinness cake.

Is this an occasion to celebrate or prepare for the fight ahead? Both it seems.

Maebh Murphy, from Waterford, moved to Berlin in 2008. The 33 year old, who works in the music industry, co-founded the pro-choice group with Dervla O’Malley, in 2012.

Under Irish electoral law, Irish citizens retain their right to vote for 18 months after moving abroad. There is no postal vote from abroad so eligible voters must travel back to have their say.

Although she can’t vote, Murphy wants to go back to Ireland with her husband, who’s from Cork, and their three-year-old daughter but is unsure if the family can afford it.

Despite being fervently pro-choice, she can understand arguments on the other side.

“I would never talk about a clump of cells because people in my family have gone through miscarriages,” she says. “I totally understand the different feelings towards it and I also think you can make your own choice yourself.”

But she feels angry about pro-life lobbyists using children with Down syndrome in their campaigns.

When she was pregnant, Murphy was given the choice of receiving a chromosome abnormalities test in Germany but decided against it.

“It’s just really insulting to think that if you had the choice then the only choice you would make is to abort all the babies because this is not the case. People will still have kids.”

Cora Quigley, from Dublin, moved to Berlin in January last year. The 28 year old’s time abroad is within the 18-month limit so she will fly back to vote and is doing all she can to raise the issue.

“I’ve already had a discussion with my mother which went really well,” says Quigley. “It’s important to have conversations in your family because people don’t really talk about it. Even people who appear liberal in other ways might be on the fence.”

PhD geography student Lorna O’Hara splits her time between her home city of Dublin and Berlin.

The 30 year old, who can vote and will return, has also been having difficult conversations.

“It’s hard to look at someone who you love and know their opinion is so different,” says O’Hara. “I’ve been an activist for six years, I know the facts. But when I sat down with my mother all of that flew out the window because you just fall apart.

“I think it was the emotion in that conversation that got her to see it from my perspective.”

Clíodhna Walsh, a writer from Waterford, says being unable to cast a postal vote is a major disadvantage. “I haven’t found a job yet in Berlin but I’m going to book flights anyway and hope for the best.”

As a doula who helps women in pregnancy and abortion, 27-year-old Kilkenny-born Jes Walsh, who has been in Berlin for five years and will go back to Ireland to campaign, says: “I don’t see abortion as an act of violence. I see it as violence when you hold people back from their choices.”

The group was launched six years ago after the death of Savita Halappanavar at University Hospital Galway due to the complications of a septic miscarriage.

“We had quite a few protests outside the Irish Embassy and vigils,” says co-founder Dervla O’Malley, from Galway. “Every year on the anniversary of Savita’s death we hold a vigil.”

O’Malley, who has been making sure the event runs smoothly, says the money raised will go to abortion rights and support groups in both the Republic of Ireland and Northern Ireland.

“This referendum is well overdue,” she says. “We’ve waited a long time for this.”

Outside, the industrial estate is cold and grey – the opposite of the electric atmosphere among the Irish expats. Physically they are in Berlin. But these emigrants feel more connected to Ireland than ever.